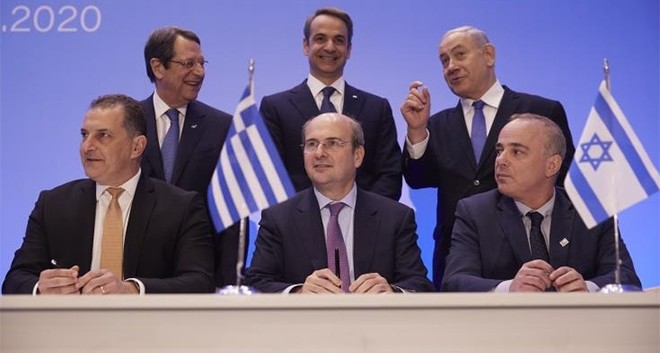 The intergovernmental agreement for the construction of the EastMed natural gas pipeline, according to the CNA, was signed at Zappeion Megaron, in Athens, by Greece`s Environment and Energy Minister Kostis Hadzidakis, Cyprus` Energy Minister Yiorgos Lakkotrypis and Israeli Energy Minister Yuval Steiniz.

The agreement was signed in the presence of Greece`s and Israel`s Prime Ministers Kyriakos Mitsotakis and Benjamin Netanyahu, and President of the Republic of Cyprus, Nicos Anastasiades.

During the joint press conference that followed the signing of the agreement, President of the Republic of Cyprus Nicos Anastasiades said that the EastMed agreement constitutes a historic milestone, which confirms in the most tangible and convincing way the trilateral cooperation between Greece, Cyprus and Israel, which has matured to the point that it provides strategic projects with significant geopolitical value.