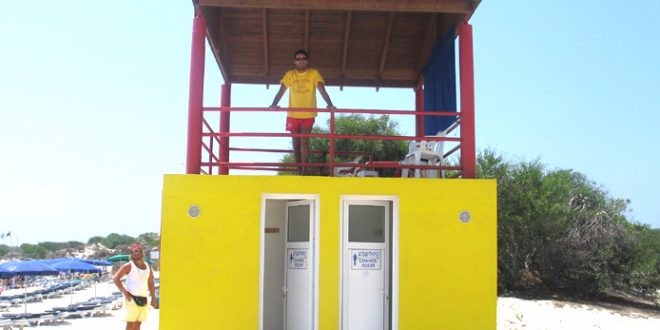 The number of seasonal lifeguards in Cyprus will from July rise to 217, the highest ever number for the island, Interior Minister Constantinos Petrides has announced.

This number will, in addition, be supplemented by 53 hired by the municipalities of Ayia Napa, Paralimni and Sotira on their own initiative, bringing the total to 217. It is understood the number of seasonal lifeguards hired fluctuates year to year.

Petrides said lifeguards at some particularly tourist-heavy beaches would also be working until 7pm.

Working hours depend on each municipality but some lifeguards get off duty as early as 5pm when beaches are often still packed.

He also said the Interior ministry had during the current year made €200,000 available for the purchase of life guard equipment including jet skis, wireless radios, boards and other equipment “and to ensure their towers are properly equipped”.

“Even now but particularly from the start of July, Cyprus will have its largest ever number of lifeguards, and they will be fully-equipped,” Petrides said.

He is confident the move would also have a positive impact on tourism.

Lifeguards in Cyprus have long complained of being understaffed and also requested longer working days to ensure the beaches remain covered from early morning until sun set.

Lifeguards have already saved a number of lives so far this year, including an elderly tourist just minutes after they came on shift at 11am.