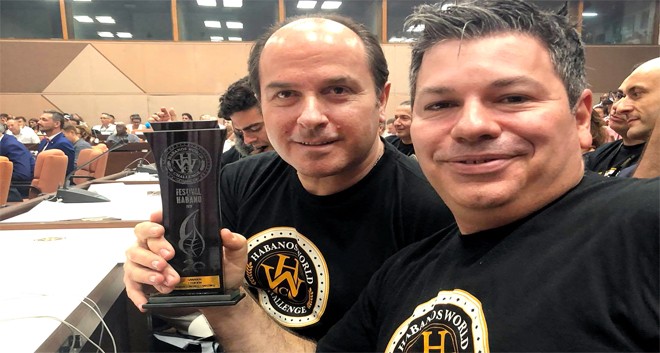 The Cyprus national team, made up of well-known tax consultant and Chelco VAT’s Managing Director, Alexis Tsielepis and jeweller, Raffi der Garabedian, beat the Cuban team at the event’s finals on Friday, 2 March 2018 after an intense battle that involved agricultural, industrial phases, practical and demonstrative issues of Habanos cigars. The challenges included a blindfolded tasting, pairing cigars to fitting beverages, a written test and much more.

The Cypriot duo managed to impress the judges and spectators with their knowledge and passion for Cuban cigars with the results being widely covered by the Cuban mass media.

“We couldn’t believe it. The Cyprus flag waiving in first place at a cigar competition in Cuba. It was amazing,” an elated Tsielepis said.

“The entire week I was there, I never left my room. I was studying and honing my skills. When they announced that the island of Cyprus won, it was a very emotional moment for all,” he added.

Cigar aficionados from all over the world competed in the World Challenge organized by Habanos, S.A. at the 20th Habanos Festival. The contestants competed through stage rounds in their respective countries around the world to represent their nations in the final rounds in Havana.

The award ceremony took place in the presence of Stelios Georgiades, Chargé d’Affaires of Cyprus in Havana and Walid Saleh, Director of Phoenicia Cyprus, the largest distributor of Cuban cigars in the world.