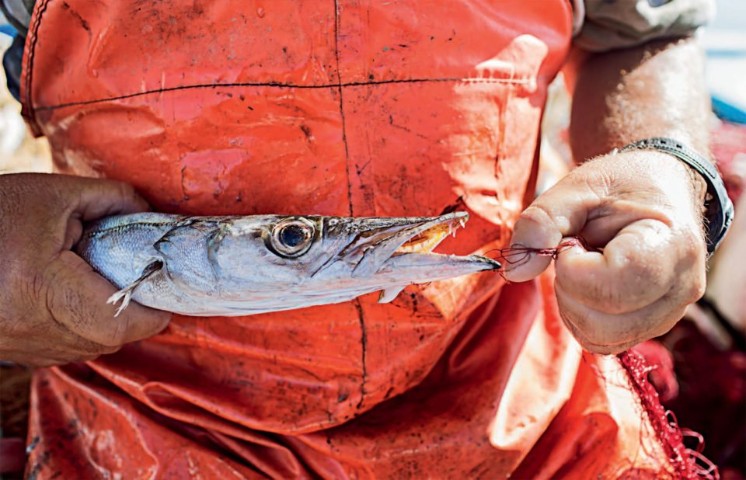 Sardines, octopus, shrimp, goatfish, mackerel – the waters off the coast of Cyprus are teeming with life. According to Yiorgos Nikola, fifteen kilos is a good day’s haul for a one-man boat

Yiorgos comes in to anchor shortly before eight in the morning. He steers the flat, white Captain Tooylne carefully between the cutters, speedboats and yachts in the little port of Latchi. Once the boat is moored, its owner sits down on deck between his nets and carefully removes his catch from the meshes. A handful of large shrimp, three substantial octopuses and “skorpois, a scorpion fish, very dangerous”. These dragon-headed creatures have glands on nearly all of their fins that excrete a toxic protein.

Yiorgos set out at half past four, long before sunrise, and threw out a dozen nets. The muscular man in his orange rubber trousers and camouflage shirt cheerfully tells us that he has done this job “since birth”. His father was also a fisherman. Gradually more fishing boats chug into the harbour basin. And the van of the fishmonger snakes its way between the yachts that are jacked up to be repaired on the quayside. On a good day, Yiorgos can sell him fifteen kilos – “but if my catch contains a lot of sardines, I don’t earn much. My father often returned with sixty kilos. But nowadays there are far more boats than there used to be and due to global warming we have fewer and fewer fish …” What’s more, diesel has become more expensive. And for some time, the fishmonger has been paying them less.